Exploring the Three Service Models of the Cloud

Exploring the Three Service Models of the Cloud

According to the NIST (National Institute of Standards and Technology), the cloud consists of five essential characteristics, three service models, and four deployment methods.

The key to remember is that regardless of the function of the service, the central idea is all of these services revolve around abstracting the physical resources and creating or presenting these resources as services for the end user. NIST considers IaaS, PaaS, and SaaS the three main cloud service models. Regardless of how many different services are available, providers are no longer concerned with specific products, platforms, and physical boxes. Instead, providers supply a wealth of exceptional services.

Additionally, the cost model is changing. While a fixed cost is still an option, the more popular methods include an allocation-based and a utilization-based approach. The allocation-based approach is simply paying for the hardware configuration used. For example, the number of servers, the number of CPUs in the servers, and the amount of RAM in each server all have associated costs. Utilization-based refers more to OneDrive and Dropbox in which the cost is dependent on how much disk space is purchased or utilized.

Infrastructure as a Service (IaaS)

Infrastructure as a service is exactly as it sounds. The provider provides all the infrastructure items, including the networking, storage, servers, and virtualization. The illustration below illustrates this concept. The blue color indicates all the components the provider supplies, while the end user provides the OS (operating system), any middleware, data, and any applications. 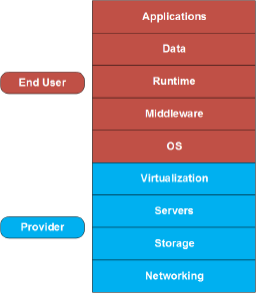 Infrastructure as a Service (IaaS)

Amazon Web Services (AWS) is a great example of the IaaS model. By having AWS supply an order based on your storage needs, servers, virtualization, and even security needs, you end up with a data center as a service. This is such a popular cloud service that most people probably think of IaaS when they think about the cloud.

Platform as a Service (PaaS)

Developers might not want to spend the time setting up, configuring, and changing their environments for development and for testing. With PaaS, the cloud provider handles the hardware layer as well as the software layer. The cloud provider takes care of the operating system, middleware, and runtime - everything an application requires to run. In this model, all the scaling, maintenance, and redundancy are fully managed in the cloud.

Developers can focus on their applications. This in shown the below illustration, in which the distinction from IaaS has significantly moved up so all the user controls the data and the applications. Microsoft’s Azure environment and Google’s App Engine are great examples of these types of attractive options, especially for organizations with smaller teams and budgets that don’t include the management and support of their own infrastructure. 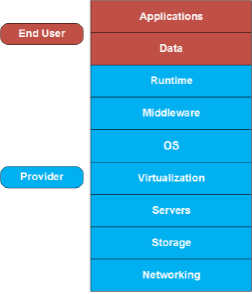 Platform as a Service (PaaS)

Software as a Service (SaaS)

This brings us to our last major cloud service, software as a service (SaaS). The cloud provider delivers the entire infrastructure over a network or the internet. The user is not responsible for setting up anything. The user is accessing these resources with any device and from anywhere that’s convenient. Google’s Gmail is a great example of SaaS, in which Google’s e-mail infrastructure is used and all the IT responsibility is offloaded to the cloud provider. Other examples include Citrix’s GoToMeeting, Microsoft’s Office 365, Cisco’s WebX, Google Docs, and hundreds of similar offerings. The below illustration shows SaaS. In this instance we are all blue – no separation as someone else is controlling everything including the maintenance and upkeep! This model also is so popular that often people think this is the cloud.

Software as a Service (SaaS)

It is important to mention that there can be variations and degrees to surrendering all control to the cloud. Think of Microsoft Office in which some programs can be set up as true SaaS programs, or IT can introduce some controls moving this model towards more of a platform as a service or infrastructure as a service model.

The bottom line is that no matter what acronym we hear, these scalable services offered by today’s cloud providers are based on these fantastic cloud models.

Is a Hosted Call Center a Good Fit for Your Business?