Feature of the Month

ANI, also referred to as automatic number identification, is used to identify the number calling when the phone rings. In a call center, the system can screen the ANI and use the phone number or pattern when routing calls to agents or clients.

How Can ANI Be Used to Manage Calls?

The ANI can be used to route incoming calls and perform specific behaviors. The system can be programmed to match the full, 10-digit ANI phone number exactly, or it can contain the letter “x” in place of a digit. For example, an ANI value of 7115557816 would program the system to only route calls that match this specific number to the client specified. An ANI value of 711555xxxx would program the system to route all calls that start with 711555 to the client specified, regardless of the last four digits. 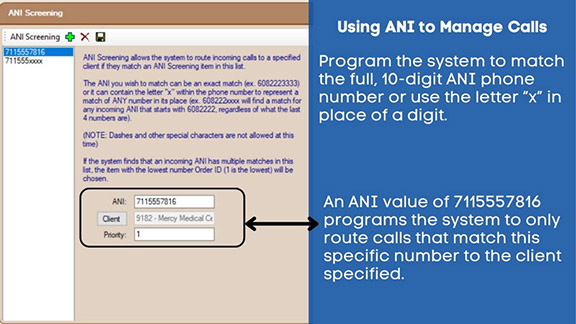 If two clients share similar phone number matches, the priority assigned in the system will be used to determine the order in which the calls are routed. As an example, with the following three ANI Screening values configured in the system: 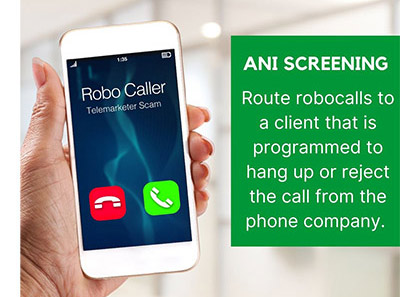 The ANI numbers can be assigned to accounts set up for special behaviors, such as to block unwanted calls from telemarketers, harassing callers, automated dialing systems, and incoming faxes by routing calls from those phone numbers to an account that simply plays a recording or hangs up.

This makes it easy for call centers to handle unwanted calls, by automatically disconnecting the call so the caller does not know their ANI is being screened. Calls from fax machines can play a recorded message such as “This is not a fax number.”

The ANI Match feature is used to program a specific behavior for incoming calls with an ANI that matches an ANI that is programmed in the system. The ANI Match behavior can expedite the call forwarding process and provide a convenient way for clients to check-in to receive their messages.

The ANI Screening and Match features are just a couple of ways the ANI can be used in your call center. The ANI helps reduce agent workload and streamlines the call handling process. As technology evolves the ANI will be used in conjunction with Artificial Intelligence to further enhance the agent and caller experience.