Communication between Genesis and IS

Genesis relies on the Intelligent Series (IS) to tell it what to do when a call comes into the Genesis system. The communication link between Genesis and IS must remain open at all times in order to function properly.

When IS is Running Smoothly

When the IS Virtual Server is up and running, it communicates with the Genesis Virtual Server. When a call comes into Genesis, it communicates with the IS ACD to determine where to route the call. Once Genesis routes the call to an agent station, the IS Database provides the agent workstations with client information, directories, messages and scripts. The agent workstations and the IS Database are constantly in communication with one another throughout the call. 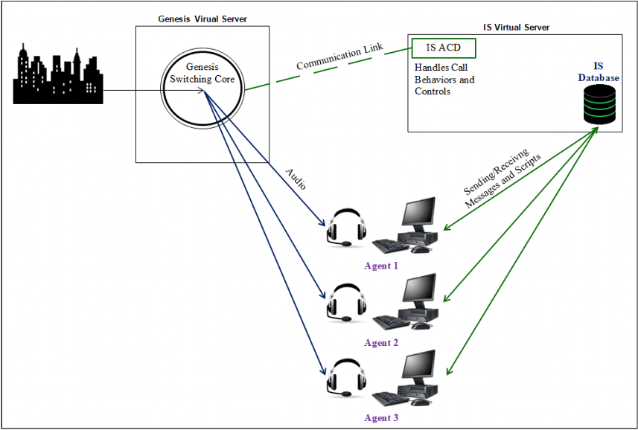 When the IS Virtual Server Goes Down 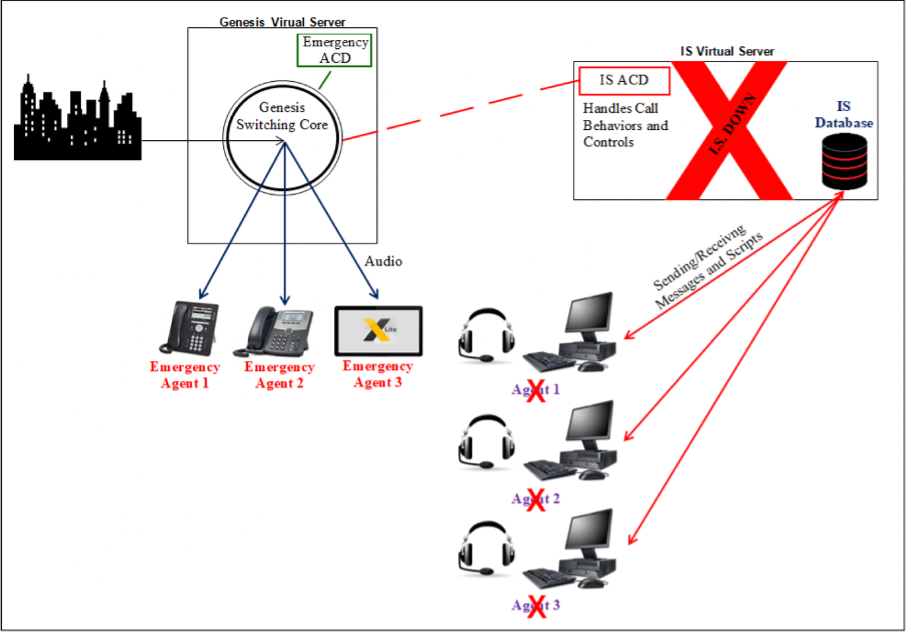 How is Call Traffic Directed?

The Genesis Emergency ACD allows agents to continue receiving calls even while IS is down via emergency agent stations. These stations are setup in the Genesis Soft Switching program and are configured by Amtelco Field Engineering. The Genesis Emergency ACD distributes calls on a round-robin, one call at a time, basis with calls being routed to Emergency Agents in the order that they are received by the Genesis Soft Switch. Each client application has a pre-assigned Genesis behavior that controls what happens when a call reaches an application queue. If there are no Emergency Agents, Genesis can play a text-to-speech announcement prior to hanging up.

Emergency stations can be setup on a physical desk phone or on soft phone like XLite through IP addresses different from those the agent workstations are configured to use. While IS is down, anything on the IS database, including scripts, is inaccessible until IS is back up. All calls processed while in Genesis Emergency ACD mode are taken without using scripts.

How are Active Calls Handled?

Emergency agents need a code in order to log into and out of the Emergency ACD queue and to pause and resume their availability to be assigned calls. These codes are configured in the Genesis Soft Switch under Feature Access Codes. Emergency agents can be automatically logged in when IS goes down if the Auto Login checkbox is marked in the emergency agent settings.

The Emergency Prompt Text-to-Speech (TTS) setting is used if there are no available emergency agents.

When there are no agents programmed to answer calls assigned to a distribution queue for this instance of the Emergency ACD application, Genesis recites the Emergency Prompt TTS text and then disconnects the call. The Emergency Prompt TTS is completely customizable and can be changed at any time, but does require a restart of the Genesis component of the IS Service in order for the changes to take effect.

The Tasks page in IS Supervisor System Setup is used to restart the Genesis component of the IS Service. When changes are made to the Genesis Soft Switch configuration, Genesis must be restarted in order for the changes to take effect.

Note: Amtelco recommends speaking with a Field Service technician before restarting Genesis for any reason.